It’s no wonder that this soup is so popular: it’s colorful and delicious! With a medley of pork and vegetables swimming in a warm, savory broth, you can’t go wrong with this dish.

From start to finish, this recipe takes less than 40 minutes to prepare and cook, so there’s no reason not to try it!

If you’re looking for a soup that’s low in calories but high in flavor and nutrients, this is the soup for you. This meal is also visually appealing and will undoubtedly attract attention.

Several varieties of quinoa soup exist, each adding and mixing up different meat, stock, and vegetable. But one thing that still holds true is the classic Peruvian flavors that come through with the seasonings.

Quinoa has long been called a ‘super food‘. Quinoa has been an essential ingredient in many Andean recipes for over 5,000 years. It’s now used in everything from desserts to soup. to Its origin is even the subject of legends and myths. One legend involves a boy who tended the crops around Lake Titicaca and who discovered quinoa when he flew on the back of a condor. The condor gave him seeds to plant and feed his people when he returned.

For rainy days and cold weather, soup is the perfect dish. Not only is a bowl of Pork and Quinoa Soup time-saving, but it is also filling, a good source of fiber and protein, and can be jazzed up or made simple to suit your taste.

Can I use other meats?

If you want to make it vegan or vegetarian, you can remove the meat and just use vegetables and vegetable stock instead. If you would like to try different types of meat, you can substitute the pork with chicken or beef. If you prefer, you can use chicken broth or beef broth.

What spices can I use as alternatives?

Peruvian seasoning is characterized by its aromatic, spicy, and robust flavors which include imported and native Peruvian herbs and spices like oregano, basil, cilantro, cinnamon, black pepper, coriander, cloves, cumin, fennel, nutmeg, turmeric, thyme, marjoram, paprika, paico, and huacatay. Adapt the recipe to your taste by mixing or matching these spices. Obviously, try small amounts of one spice at a time to see what works and to prevent overpowering the dish.

Is this pork & quinoa soup gluten-free?

Yes, it is. But be sure to check the ingredients list of the pork stock if you’re not using a homemade broth.

How long does it take to cook the pork in this dish?

This depends on how big you slice the pork. The smaller it is the faster it is to cook. To make sure, I recommend simmering the pork together with the stock for at least 10 – 15 minutes, testing it before adding the quinoa.

How to store quinoa soup leftovers?

Make sure to cool the soup to room temperature before placing it into an airtight container. This can keep in the fridge for a week or two, and in the freezer for a month. Make sure to thaw it out before heating it up in the microwave or pot.

What is the difference between white, red, and black quinoa?

Aside from color, there are small distinctions; white quinoa is the most prevalent, with the lightest and fluffiest texture when cooked. Red quinoa has a deeper, nuttier flavor and is slightly chewier. Black quinoa has an earthy flavor and holds its shape the best of the two; it is commonly used to add crunch to salads.

If you like this recipe, try our Chicken & Quinoa Soup and Vegetarian Quinoa Soup recipes 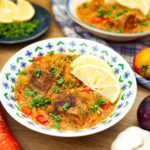 Print Recipe
No ratings yet

Looking for a soup that's low in calories but high in flavor and nutrients? This is the soup for you. This visually appealing dish will undoubtedly attract attention. Easy to make and popular with the whole family.
Prep Time8 mins
Cook Time30 mins
Course: Main Course
Cuisine: Peruvian
Keyword: pork stew, quinoa, soup
Servings: 8
Calories: 251kcal

Peruvian foodie. I’ve been writing about the food of Peru for over 10 years. Read more about the Eat Peru team here