Food is integral to culture, and culture is integral to revolution. When it comes to cultural restoration for a people seeking their roots and their heritage, nothing reforms those natal bonds so powerfully as food. This is especially true in Peruvian culture, where many citizens who spent years in exile during governmental turmoil have returned to re-establish their pre-Hispanic cultural heritage and traditions in the past thirty years. One of the most powerful symbols and agents of change to impact this reclamation process is the birth of what has been Novoandina or Novo Andean cuisine, which translated literally means “New Andean” food.

The origins of Novo Andean Food

Chile, Peru, and Bolivia all share a common heritage in much the same way as they share the vast Andes Mountains range in all three countries. In recent years, they have broken with the colonial past and begun to establish connections with their own native pasts, preparing food and creating new dishes with the ingredients that have been used by their ancestors for centuries before the first Spanish conquistador ever set foot in South America.

In the Peruvian capital of Lima, this trend of traditional food with a contemporary twist has been popularized by locals and tourists alike. Many who have championed Novo Andean food though may be unaware of not only its singular history, but the primary driving forces that shaped and moulded Novo Andean cuisine into what it is today. Let’s examine the social, cultural, and historical context that gave birth to novoandina, and how it has been popularized since its inception.

After nearly a century of independent and aristocratic rule, the Peruvian government finally collapsed into militaristic and democratic factions shortly after 1930. Precipitate by the Great Depression in the United States and Europe, Peru’s governmental decline and upheaval began amidst fighting between communist and militaristic forces, each attempting to wrest control away from each other. Guerilla warfare, mass executions, and numerous coupe d’etat attempts followed in the ensuing decades, with the people of Peru suffering greatly from the turmoil and upheaval.

A broken nation has little nationalistic spirit, and many with the resources or influence to flee left for the United States and Europe. This diaspora accelerated abruptly in 1968, when General Juan Velasco-Alvarado overthrew Peru’s democratically elected president, Fernando Belaúnde Terry. The years of harsh military rule that followed saw struggle and hardship for the people of Peru, and many in exile during this time began to yearn for home. That long-awaited day finally came in 1980, when Belaúnde was re-elected to office and recalled from exile. It was during this time of tremendous hope and change that Novo Andean cuisine was born.

The 1980s: End of Exile and The Rise of Novoandina

When Belaúnde was re-elected to office, he immediately restored ownership of the press to private citizens. With the Fourth Estate free to operate, they began to become the chief restorers of Peruvian culture and society throughout the 1980s. It is through this unlikely source that Novandina would receive its first champion: Bernardo Roca Rey. Hailing from the influential journalistic family Miro Quesada, Roca Rey began writing under a pseudonym for a character he created in a column dubbed “Fin de Semana”, or The Weekend. This colorful journalist, whom Roca Rey referred to only as El Comensal (“The Diner”), wrote glowing culinary reports of the food and drink being created from traditional Andean ingredients with European techniques and ideas that had returned with the many exiles after the ouster of General Bermudez by Belaúnde.

To give a little background to Roca Rey’s inspriation for his column, it is neccesary to understand the turmoil in the highlands during this time. Despite the many liberties and freedoms restored to the people of Peru and their first democratic election in decades, there were two guerrilla groups in the Andes mountains who refused to lay down arms and recognize the democratically elected government. Because of the violence and terrorism plaguing their mountain homes, many Peruanos living in the high mountains fled to the urban ‘lowlands’ of Cuzco and Lima. With them, they brought the centuries-old pre-Hispanic recipes and ingredients that would become the basis for Novo Andean cuisine.

When Roca Rey went out to dine as “El Comensal”, he would often eat in traditional communal kitchens with the newly relocated highland refugees, and he developed both a love and passion for the traditional fare they served. Through these many meals and conversations with the native Quechan-speaking mountain dwellers, Roca Rey would learn what ingredients were best and how to prepare the rich, delightful Andean cuisine for himself. It was not until 1986, however, that Novo Andean cuisine would burst forth onto the world stage.

Roca Rey, in his persona of “El ” was summoned to Lake Huacachina, Peru to serve as a judge for the Gastronomical Association of Peru (AGAPE). The chefs at the lake were all preparing and serving “traditional” Peruvian cuisine, prepared to be tasted and judged by journalists and other master chefs.

Roca Rey found their dishes to be anything but traditional openly critical of the chefs’ authenticity. Naturally, the affronted chefs issued him a challenge: If Roca Rey didn’t care for their cooking, he should go to the local market nearby and make them a “real” traditional Peruvian dish.

Never being one to back down from a challenge, the fiery Roca Rey proceeded to the local market in the town of Ica and purchased everything he would need to create what is today considered the signature dish of Novo Andean cuisine: la gran olla Huacachina. The chefs were so impressed by the simplicity and authenticity of his dish that they conceded defeat and named him a champion.

From that time forward, via “El ” and through other master chefs that returned from exile to develop and prepare Novoandina dishes, Bernardo Roca Rey was the herald and champion of the cultural reclamation and re-invention that is today called Novo Andean cuisine.

Novoandina continues to evolve and grow since its worldwide debut, but there are several dishes which are considered signatory to the cuisine as a whole. They are as follows:

Chef Gaston Acurio’s Peruvian take on Italian Risotto, this dish is typically served with chicken, prawn, or shellfish. Plates such as trucha marinada con blinis de achira, lomo de atún con crema de arracacha, and quinoa rosada are all Acurio’s creations and draw their inspiration and basis from Quinotto. Often incorporating the Achira tuber (one of the first crops domesticated by the Incas) found in the Amazonian rainforest, this dish has its roots not only in Andean culture, but also in the Chavin, Nasca, and Paracas cultures as well.

The brainchild of chef Cucho La Rosa, this ingredient is used in both the coca sour cocktail and a bread made from coca and mashua, a Peruvian superfood that’s newly popular internationally. Controversial on the world stage, coca leaves have been chewed (for altitude sickness prevention) and cooked with for centuries before the plant was used to create a refined narcotic. Mashua is a tuber, grown, like maca, at high altitudes in the Andes.

A dish very similar to the Pachamanca, this dish uses chuño, a type of potato which has been freeze-dried, mote, a blend of boiled corn , and chalona, the cured meat of an alpaca (but is now sourced from other animals) as the main ingredients.

Hirka Roca Rey, journalist and restaurateur of the famed Pantagruel, is credited with the internationalization of maca root in Novoandina. Her best-known signature use of maca is her chicharrones en salsa de maca. Maca is now a widely used food supplement and is seen by many to have anti-cancerous and libido-enhancing properties, among other things.

This traditional highland tuber was introduced into Novoandina by Rafael Piqueras with his pulpo a la parrilla con vinagreta y yacón, and the equally delectable cebiche con espuma de aji amarillo, both dishes that he presented at the gastronomical fair of Madrid in 2000. Yacón is also considered a superfood due to its many health benefits.

Limo Restaurant in Cusco, the gateway city to Machu Picchu, offers several dishes that are considered ‘Novoandina‘, and several others that are blends of international or modern Peruvian dishes and Novo Andino dishes. Peruvian food is a magnificent blend of many cuisines and most people will welcome the mixing of new and old.

Aguaymanto Resto Bar, a Cusco restaurant (named after yet another Peruvian superfood), is highly rated by reviewers. Alpaca saltada, a Novo Andean version of lomo saltado is just one of the dishes

The Portland, Oregon location of Andina restaurant, is far away from the usual hotspots of Peruvian cuisine, but this hasn’t hindered the restaurant’s ambitions. The ‘novoandina‘-influenced menu contains dishes such as Quinotto, Carapulcra con cerdo, and Atún con tacu tacu y aguaymanto.

All in all, Novo Andean cuisine represents the best of a nation still in the long process of cultural reclamation and renewal after nearly a century of turmoil and political upheaval. With the rise of cultural reclamation in Central and South America, many nations formerly dubbed narco-republics or military dictatorships are throwing off the stigma of their past and joining the international community as equal contributors to culture, science, and social well-being. Novo Andean cuisine is as much a major component of a cultural revolution as it is a revolution in the culinary arts.

Many Peruvians are beginning to understand the rich cultural heritage and history of which they are an ever-evolving part. A new understanding of what it means to be Peruano or Peruana is emerging out of the ashes of violence and tragedy.

From the mountains back to the lowlands, Peru is finding renewal and healing for their nation and their culture that for too long has been repressed and belittled by the powers that be. Though it has been a long journey, and difficult one, the widespread acceptance of Novoandina is proof positive that Peru has journeyed far from the problems of the 20th century, and are well on their way to a new era of peace and prosperity based on their reclaimed heritage and culture. Viva Perú! 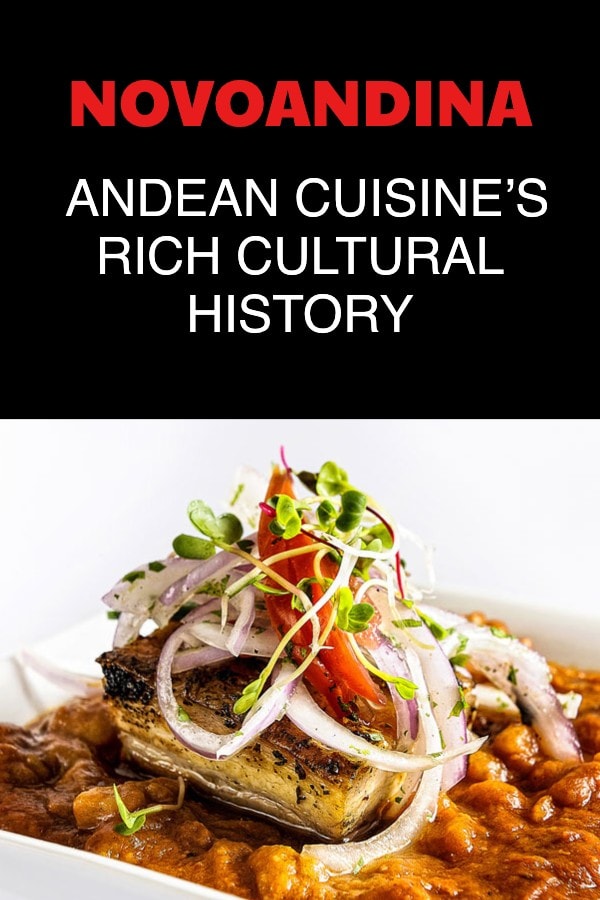